Hello, everyone! I know it's been over a week since I went on this trip, and I am WAAAY overdue for writing this blog. Life has been really busy around here. Finals are coming up, so my life is full of writing papers and worrying about tests. Buuuuuuuut, I did have a fantastic weekend in Stratford, so I want to tell you about that!

We left campus around 8 in the morning to head to Stratford-Upon-Avon, Shakespeare's birthplace, which is about 3 hours drive from here. While everyone else took the time to go back to sleep, my friend Alora and I spent most of the time listening to Dane Cook and laughing hysterically. I'm sure we were really annoying to the rest of the bus, but it was well worth it!

Anyway, we got to Stratford and checked into our little bed and breakfast. It was so cute! They gave us a cute little tea set in our room, and everything was floral printed and adorable! When we were all settled in, we walked to the main town area to go see Macbeth! They showed us where the theatre was, and we had an hour before the show started, so Alora, Valerie, Becca and I went to go get some lunch. We walked around the main town area, which is super cute! The River Avon runs right through the town centre, and there are all these little cute boats running up and down it! So adorable! Plus, it was Shakespeare's birthday that weekend, so there were people dressed up in costumes, etc. and just walking around town! It was so cool!

Pretty soon, our hour was up and we went to go see Macbeth at the Royal Shakespeare Theatre, performed by the Royal Shakespeare Company. I practically peed myself with excitement. The show was AMAZING! It was very refreshing to see some well done Shakespeare! After the show was over, we walked around the gift shop where I geeked out over all of the Shakespeare stuff (such as the SHAKESPEARE BOARD GAME!!!!!) and then headed out to look around the town some more. We found a little shop that sold Harry Potter stuff (!) so we geeked out in there too! I basically just had a really geeky weekend. That evening, we went to see the Shakespeare Institute's Shakespeare scene night. It was nothing compared to the Royal Shakespeare Company, but it was nice to support the local college actors. After that, we were tired so we headed back to the bed and breakfast for the night.

The next morning, we got a traditional English breakfast  from the Bed and Breakfast. I didn't know what a traditional English breakfast was, I just knew it existed. But here's what it is: A sunny side up egg, half a tomato, some sauteed mushrooms, baked beans, a sausage, a strip of bacon that was definitely not crispy, and toast. Talk about an odd assortment of foods! But it was all good! After breakfast, we took a guided tour of Stratford and learned about the history of the town which was cool. When we got back from that, we hopped on the bus and headed to Warwick Castle, about 20 minutes down the road.

Warwick Castle is seriously the coolest place ever. I wish we had places like this in the States, because I would totally go there all the time! It's an old castle with live fencing/jousting shows, peacocks running around, people dressed in costume, haunted dungeons, a wax museum, archery, etc. SO COOL!!! Val, Alora, Becca, and I all ran around the castle like little kids for 4 hours and had a blast! The wax museum was really cool! It had wax figures of people who used to live in the castle. We had fun posing for pictures with all of the wax people! After that, it was time to go home, but it was a great weekend! 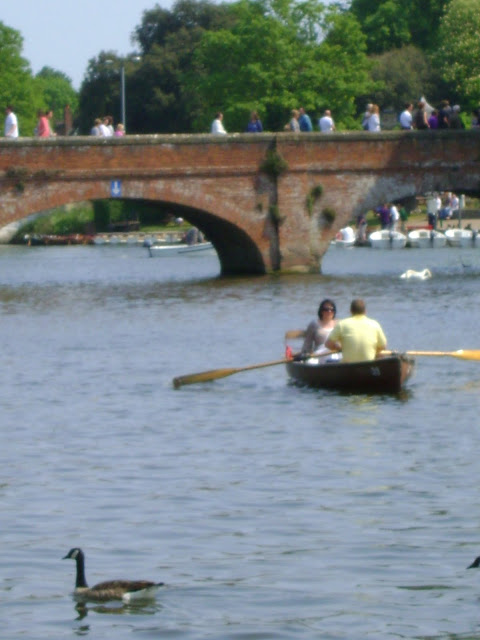 Things I'm Loving: Castles (!), Shakespeare, Beds that you can't feel the springs through!

Things I'm Not Loving So Much: My looming exams, the fact that I'm going to have to leave this beautiful place.

Things I'm Learning: That peacocks MEOW, To take advantage of the time I have left.

I can't believe how quickly this semester is flying by! I only have 5 more weeks here! I'm trying to get as much of my work done as I can now so that I can enjoy my time to the fullest! I'll be writing again soon!